Roger Reaves grew up a poor farm boy in Georgia and went from making ‘moonshine’ to becoming one of the most prolific smugglers of the 20th century. He covered six continents, transporting 20 ton ship loads of hash, tons of cocaine, and completed more than 100 sorties across the US border with plane loads of marijuana.

His friends and associates spanned the globe. From Medellin Cartel kingpins Jorge Ochoa and Pablo Escobar; to “Mr Nice” Howard Marks and the infamous Barry Seal who was Rogers close friend and employee.

He escaped from prison on five seperate occasions; was shot down in both Mexico and Colombia; and tortured almost to death in a Mexican prison. Despite it all, Roger still has a twinkle in his eye as he recounts his life story.

And you have probably never heard of him…till now. 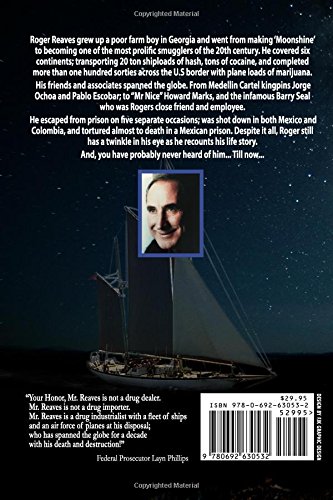